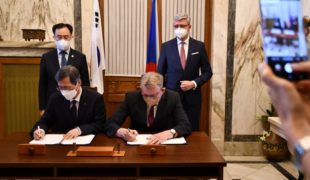 Within the framework of the state visit of the Minister of Industry, Trade and Energy of the Republic of Korea Mr. Moon Sung-wook to the Czech Republic, representatives of the Czech industry and the management of KHNP – a leading player in the construction of nuclear power plants in the world – signed a declaration on future cooperation in the field of nuclear energy. The signing of the memorandum took place on Friday 18 June at the MIT in the presence of Minister of Industry and Trade Karel Havlíček.

The Memorandum follows the visit of the member companies of the Czech Power Industry Alliance (CPIA) to the KHNP headquarters in South Korea at the end of May, where both sides learned about the possibilities of mutual cooperation and involvement of Czech companies in the construction of a new nuclear power plant in the Czech Republic.

“The signing of the declaration confirms the interest of both parties in cooperation and the realisation of the extent of the partner’s capabilities and know-how. From the signing we hope to establish a basic line of communication and decision-making between the two entities in order to be ready and adequately respond to various topics of mutual cooperation, including strategic partnerships across markets,” says Milan Šimonovský, Chairman of the Czech Energy Alliance Committee.

The Memorandum creates a framework for future cooperation in the construction of new nuclear power plants not only in the Czech Republic but also in other countries. It opens up the possibility for Czech companies to participate in projects implemented by KHNP in the areas of design and engineering, service and research and development. It also regulates the basic communication and decision-making environment for the organisation of cooperation between the Czech and Korean industries in the nuclear energy sector.

“I am convinced that cooperation with CPIA and its members representing the Czech nuclear industry will play a key role in achieving successful results in the construction of new nuclear units in the Czech Republic. The signing of the MoU also serves as a springboard to further expand our cooperation, including jointly advancing in the European market,” adds Seung Yeol Lima, Vice President of KHNP’s New Nuclear Division.

Czech nuclear industry in the world

Czech companies have a lot to offer in the nuclear industry. They are among the European leaders in engineering, manufacturing and servicing nuclear equipment, throughout the entire life cycle of a nuclear power plant. According to Milan Šimonovský, they are also one of the cornerstones of the ability to independently operate and service nuclear power plants in our country. For example, the control systems and know-how of the Příbram-based company ZAT a.s. are deployed at 30 percent of nuclear power plants in the EU and 10 percent worldwide, including both nuclear power plants in the Czech Republic and Slovakia. ALTA, a.s., in turn, provides comprehensive solutions in the field of the fuel cycle of nuclear power plants, from the supply of nuclear materials and fresh nuclear fuel to optimization studies of its use in the reactor and after its irradiation. Another company with Czech know-how – Doosan Škoda Power s.r.o. – is a major global player in the supply of turbines and related equipment and systems. Daniel Procházka, Chief Operating and Commercial Officer of this company, says about the signing of the agreement.