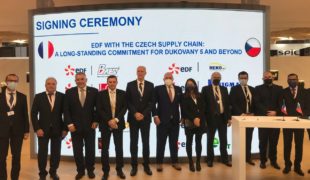 Leading Czech nuclear power industry suppliers I&C Energo a.s., Sigma Group a.s., ŠKODA JS a.s. and ZAT a.s. signed in Paris memorandums on the future cooperation with the Electricité de France S.A. (EDF), who is one of the three potential bidders for the construction of new nuclear units in the Czech Republic.

The agreement on future cooperation was achieved at the WNE 2021 (World Nuclear Exhibition) in Paris, whose main topic was the nuclear industry as a key player of a low-carbon society and a responsible future. And it is the memorandum on the completion of new nuclear units in the Czech Republic that fulfill the initiative of the global nuclear market to play an important role in the struggle against climate change.

“Especially today, when the electricity market shows longer-term instability and possible fluctuations in electricity supplies and prices, it is more than necessary to proceed quickly with the construction of planned nuclear power plants, which directly affects the Czech Republic,” says Mr. Milan Šimonovský, Chairman of the Alliance Committee, which represents the Czech nuclear sector at the international level.

There is something to follow-up

The Czech companies that signed the memorandums are not newcomers for EDF. For example, Škoda JŠ currently supplies four sets of internal reactor parts for the French concern. ZAT Příbram, the manufacturer of control systems for energy and industry, will produce and assemble 58 control system cabinets for 20 nuclear power plant units in France operated by EDF by the end of 2024. I&C Energo has also successfully completed projects in cooperation with EDF and its subsidiaries.

Czech nuclear know-how in the world

The companies that have agreed with the French partner on future cooperation are among the major European players in the nuclear industry. They are currently involved in the construction or modernization of nuclear power plants in our country, Slovakia, Hungary, France, Finland, Ukraine, Turkey and Russia. For example, ZAT’s control systems and know-how can be currently found at 30 % of nuclear power plants in the EU and 10 % of NPP worldwide. “We have a modern SandRA control system with special safety functions included in the highest safety categories. We deploy it in Finland, where nuclear safety regulators apply one of the strictest rules,” says Mr. Ivo Tichý, a member of the ZAT Board of Directors.

Sigma Group, the supplier of industrial pumps for special applications and assembly of related technological systems, currently supplies its products and services to Mochovce NPP, Kurskaya NPP and Akkuyu NPP and provides a comprehensive supply service for Temelín NPP and Dukovany NPP. Škoda JS is another company with a dominant position on the European market and it provides its partners with a triangular business model – i.e. full service in the field of production, service and engineering and is currently involved in the implementation of a number of supplies for VVER technology and EPR technology worldwide. I&C Energo is a major player in providing comprehensive services in the field of control systems, industrial information systems and electrical systems. They have been currently working on several projects in Ukraine, the Czech Republic and Slovakia. “We also carry out important orders for Czech nuclear power plants. For example in November we signed a nine-year contract for the modernization of management and control systems for the Temelín NPP,” adds Mr. Jan Krška, the company’s sales director.

Czech companies for the Czech nucleus

The main link among the four leaders are the contracts on the European market with nuclear reactors such as VVER and EPR, including significant and long-term supplies to nuclear power plants in the Czech Republic. “We believe that thanks to their experience on the local and foreign markets, Czech companies will be significantly involved in the construction of new nuclear units in our country, both by supplying key components and by significant engineering participation in their implementation so as to maintain continuity and unique existing level of Czech nuclear energy industry,” states Mr. Josef Perlík, Executive Director of the Alliance. Last but not least, the participation of those companies in the construction will also mean faster, cheaper and self-sufficient operation and maintenance of the units. “Our advantage is the knowledge of technical, economic and legal environment, continuous tradition, qualified team and high quality,” says Ms. Miroslava Kárníková, Head of Business Development and Marketing at Škoda JS.